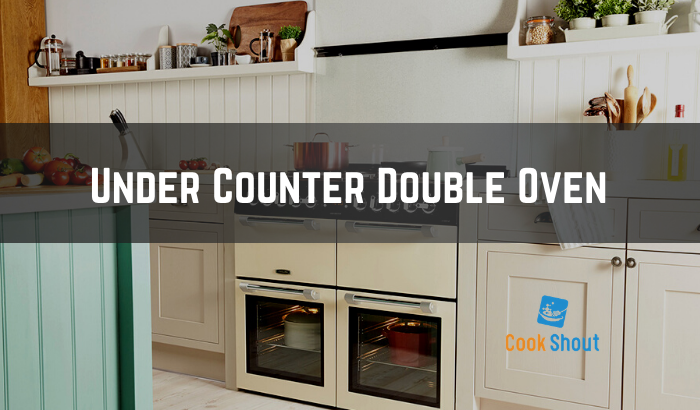 Everyone has this misgiving that an under the single oven is better than an under counter double oven. They are wrong. What is the difference between the two?

You can find similarities but, their general purpose is different. A single oven is for a person who only occasionally uses it. They probably need it to cook for big holidays.

On the other hand, there are people like me. I am a job holder. So, I cook dishes that don’t need a hands-on approach and prep them easily.

I also like to warm food quickly. For me, an under the counter double oven is a perfect fit.

Parts Of A Under Counter Double Oven.

Built under double ovens have generally the same layout. I will be describing the standard parts and details of them.

There are control dials directly below the stovetops. These control the time and temperature of the two ovens. There are also function buttons and grill buttons.

There are also fans behind the steel plates to cool them down or spread out the heat. You will get grill trays, grill wire racks, and oven trays along with the oven.

There is a digital timer that will automatically shut it down when it counts down to zero. You can also fan cook it or defrost it using the function button.

Benefits Of A Double Oven.

Why use a double oven? This is a question I will answer in-depth with much enthusiasm. It is a pleasure of mine to point people towards them.

The first and foremost pro for buying a double oven under counter is the genius way of using a storage shelf. Don’t be confused. I am talking about the storage space in a single oven.

Most of us don’t even use that space. You can install a double oven and it would take the same space as a single one.

You are getting a two instead of one and yet it won’t take up the room. Granted, under counter double oven contains only one small oven and one almost full-size one. But, it does not negate the advantage.

We live in a modern world. No one now has time to prep and cook dish by dish for a single meal. We also might want to enjoy eating multiple course meals without wanting to sacrifice the little free time we have.

side by side double oven under the counter is a handy thing to have for this reason. We can cook more than one dish at the same time. It also does not need to be the same type of dish because both ovens have separate timers and temperature regulators.

You can cook a desert and a casserole at the same time. Whether you are a homemaker or a job holder, double ovens will ease your life.

Appliances nowadays will blow up the minds of 20th century time travelers! I am only joking a little. Nowadays, double ovens can come with one full oven and a microwave/convection oven.

They can also have one full-sized oven and one smaller one. Double built under ones have almost one full-sized and one tiny oven. Under counter double oven with legs is also available.

And all of these are affordable in our society. Companies put a lot of effort into consumer comfort price reduction. You cannot survive in the market competition because people buy smart now.

They look for things that will actively ease their lives. That is also why you can get many modes in your oven now. You can boil, slow cook, steam, and bake at different temperatures simultaneously.

Double Oven Under Counter housing unit is not something to be concerned over. It is usually possible to swap the single for a double or create a separate space for it.

But, we have to first measure our space carefully so that we can buy a double that lines up with the counter.

You only need to plug it in so there is no need to call in electrical service for installation. It is the same as any range kitchen electric stuff.

There are many types of double ovens if you differentiate them through ovens. However, we can also divide them into two types based on the cooktop.

Personally, I recommend the gas stove since I think it provides an extra flavor to food that an electric stove doesn’t. The set-up is the same regardless of what type of oven you choose.

However, read the instruction manual very carefully before doing anything. They are made to guide us.

Under counter double oven reviews can give you a better idea about it. You need to think clearly before rushing to buy a kitchen appliance. When you read about the general use, it might seem like a good fit for you.

There are some safety rules that I think we should follow if we have an oven at home. They are given below:

Q. Are Under Counter Double Ovens Easy To Clean?

Ans: Most of the popular ovens have a greaseproof enamel coating. This makes it easier to clean. Unfortunately, you have to squat and reach in a lot to clean it. It has a lot of nooks and crannies that might be challenging to keep squeaky clean.

Q. What Is The Difference Between Wall Double Ovens And Under The Counter Double Oven?

Ans: Both of them are as different as the earth and sky. Double-wall ovens have to be professionally installed, need loads of space and it is an in-build appliance. Under counter ones can fit beside a standard counter or below it. It needs no extra fuss. You can install it yourself with zero hardship.

Q.Is This Type Of Oven Available?

Ans: Yes! Recently double ovens have been trendy among apartment dwellers and working-class people. They come in many models and shapes and sizes. You can choose according to your specifications.

Q. Which Model Comes In A Consistent Package?

Ans: I would say models from Hotpoint. They are cheap but stable. It is pretty spacy.

Q. Do They Need A Special Base Unit To Sit On?

Ans: No, not usually. Most singles come with a special base unit but you can take that out and swap in the double. This is because doubles are usually bigger in height. They do not need a base unit. Keep in mind that your measurement has to be careful or your kitchen counters may look uneven.

Under counter double oven has been a huge help for me. It helped me manage my time and energy. I feel that everyone can benefit from one if they are in my circumstances.

It was a wise investment for me. So, I bought one of the pricier models. If you do so, you can have a guarantee of durability and sturdiness.

Single moms like me are adept at managing both the home and the outside. But, every little bit helps. My oven has also a cooktop aligned with the counters beside it.

This helps me make meals in a jiffy. Thus, double ovens are a gift from the heavens to me.

Hi there, I am Arlene J. Clark, I am definitely a foodie girl. Very much passionate about cooking and travelling a lot. Try to experiment different fusion of food or cooking style and this is my favourite hobby. I really like to write blog posts and cooking recipes through this website. You can ask me for any kitchen unknown tricks and methods if you need. I never regret following my passion. Thanks

CookShout.com is a participant in the Amazon Services LLC Associates Program, an affiliate advertising program designed to provide a means for sites to earn advertising fees by advertising and linking to Amazon.com.

Share this ArticleLike this article? Email it to a friend!
Email sent!